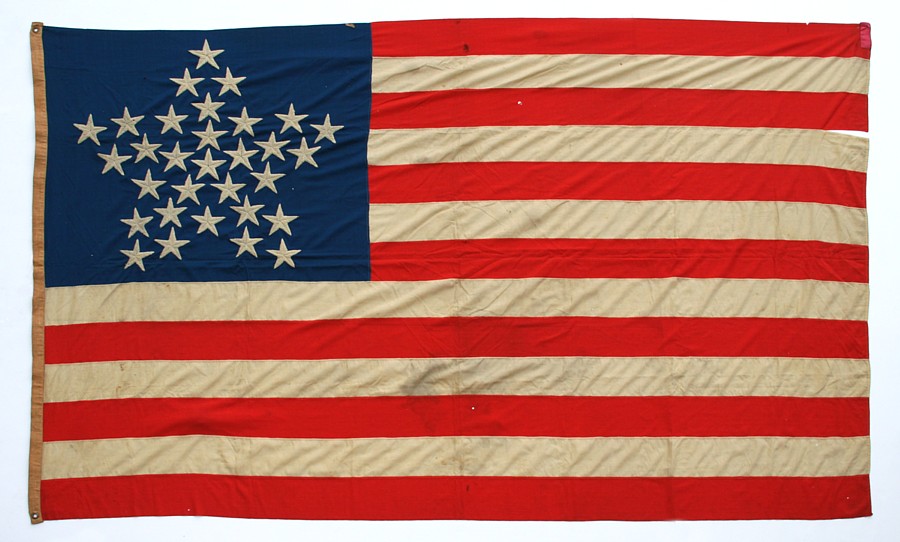 31 star American national flag with bold and highly unusual, yarn-embroidered stars. Embroidery with such thick yarn is something I have never before seen in flag-making and it adds great texture to this spectacular early textile.

The stars are arranged in bold presentation of what is called the Great Star (a star made out of smaller stars). Among collectors, the Great Star configuration is the most coveted of all 19th century geometric patterns. It probably came about shortly after the War of 1812, when Congressman Peter Wendover, of New York, requested that Captain Samuel Reid, a War of 1812 naval hero, create a new design that would become the third official format of the Stars & Stripes. A recipient of the Congressional Medal of Honor, Reid became harbor master of New York following the war. During his lifetime, he created many innovations in signal use, including a system that could actually send messages from New York to New Orleans by sea in just two hours.

Use as a Naval signal had been the primary reason for the initial creation of an American national flag in the first place, in 1777, but since there was no official star design, the appearance of our flag varied greatly. So Reid and Wendovers primary concern centered on both consistency and ease of recognition. Their hope was as more and more states joined the Union and more and more stars were added to the flag, that it would remain easily identified on the open seas. So in 1818, Reid suggested to Congress that the number of stripes permanently return to 13 (reduced from 15) and that the stars be grouped into the shape of one large star.

Reids proposal would have kept the star constellation in roughly the same format, in a pattern that could be quickly identified through a spyglass as the number of states grew. His concept for the stripes was ultimately accepted, but his advice on the star pattern was rejected by President James Monroe, due to the increased cost of arranging the stars in what would become known as the Great Star, Great Flower, or Great Luminary pattern. Monroe probably didnt wish to impose this cost on either the government or civilians, so he suggested a simple pattern of justified rows. Never-the-less, the Great Star was produced by anyone willing to make it and its rarity today, along with its beauty, has driven the desirability of American flags with this configuration.

Because of its newfound value in gold, California was quickly escorted into the Union in 1850, following the 1849 Gold Rush. The 31 star flag became official in 1851 and remained so until the addition of Minnesota in 1858. Flags made prior to the Civil War are extremely rare, comprising less than one percent of 19th century flags that exist in the 21st century. This is partly because, prior to the Centennial, our flag was simply not used for most of the same purposes we employ it in today. Private individuals did not typically display the flag in their yards and on their porches. Parade flags did not often fly from carriages and horses. Places of business rarely hung flags in their windows. Use of the Stars & Stripes for these purposes began to rise swiftly during the patriotism that surrounded the Civil War, but civilian use of the flag was not widespread until 1876.

Even the military did not use the flag in a manner that most people might think. The primary purpose before the Civil War was to mark ships on the open seas. While the flag was also used to mark garrisons, the flags of ground troops were often limited to the flag of their own regiment and a federal standard. The infantry wasnt officially authorized to carry the Stars & Stripes until the 1830s, and even then did not often exercise the right, because it was neither required nor customary. It was not until the Mexican War that U.S. ground forces regularly carried the national flag.

Mounting: The flag has not yet been mounted. I employ a full time conservation staff. Call me to discuss mounting and framing options.