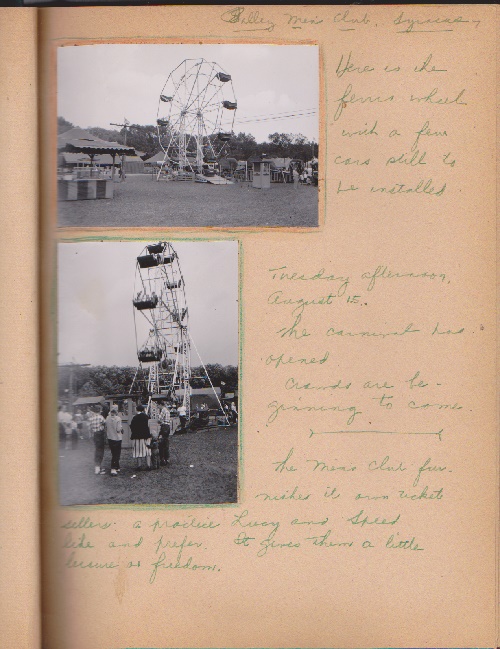 This exceptional photo essay manuscript was created by the Kochkas during their summer break to gain a deeper appreciation of the indispensable part that carnivals and amusement rides played in the recreational activities of the post-World War II American public. Leonard Sprague (1902-1970), and his wife Lucy (1894-1954) had taken over the Holman’s Rides amusement and carnival business in Seneca Falls, NY after the death of her father Lewis Holman (1865-1947). Together with their cocker spaniel named Dundee, they were superb showmen, and photos are included of their ticket booth, home, their transport trucks for their Merry-go-round, Tilt-a-Whirl, Ferris Wheel, and the Baby Tug, along with the crews, crew quarters, erection and disassembly crews, the midway, and more. The manuscript log records the first week-long stand at Syracuse, NY for the Men’s Valley Club, which maintained their own ticket booth, and would dispense to Holman’s Rides their share, details the events against the backdrop of preparing and running the show, the orphan’s day where they could ride all the rides for free, even including the rolling cook shack for the carnival workers last call before heading off for the second show the Wayne County Fair in Palmyra, NY. The fair grounds in Palmyra offer horse races next to the carnival, and an excellent series of aerial captioned photos taken from the top of the newly erected ferris wheel. Joseph Kochka (1892-1952) had served as a 2nd Lieutenant in the Provost Marshall’s Department during World War I, and when mustered out in Washington, DC where he became a public school teacher until his death, with most of his career spent at Woodrow Wilson High School. Mary Kochka (1893-1984) also taught in the Washington, DC school system, and they both appear to have enjoyed “experience” vacations in order to better educate themselves.