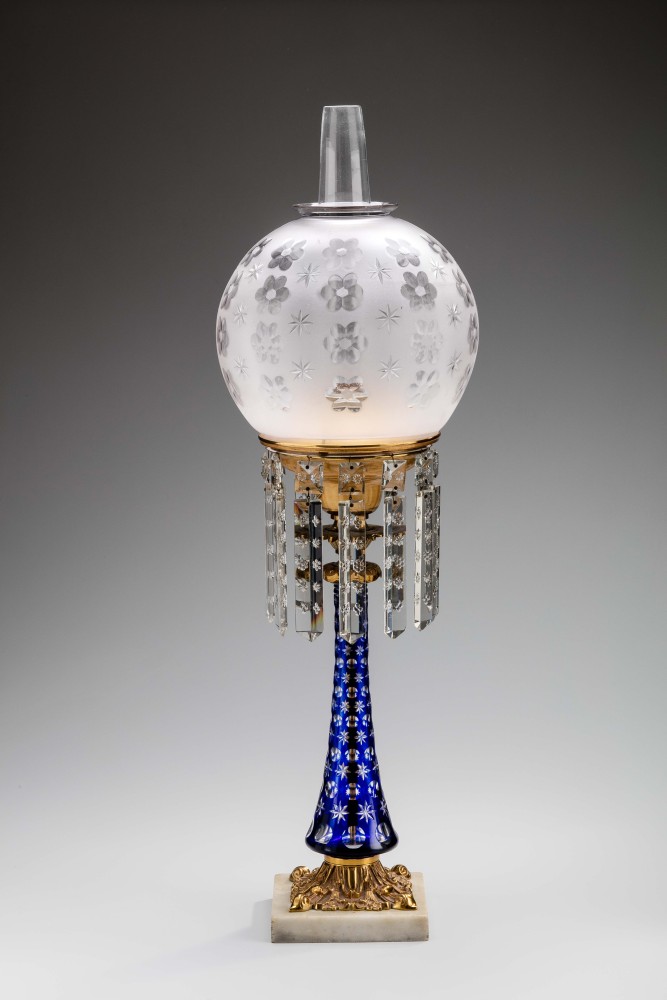 Cornelius was established in Philadelphia in 1831 and, advancing through a series of incarnations, lasted though the end of the 19th century, eventually becoming the largest lighting manufacturer in North America.[1]  By 1849, they had entered into a relationship with Dietz & Company, a New York brass lighting manufacturer.  This is relevant because the shade on this lamp is one that appears on a solar lamp in a Dietz & Co., catalogue in 1860.[2] From 1851 to 1861, the firm was called Cornelius & Baker.

The Solar lamp, so named for the brightness of its light being like the sun, worked on the Argand principle, using a central air shaft drawing air through a tubular wick to the middle of the flame. A reflector surrounding the flame also directed air flow at the outside of the flame, increasing the rate of combustion.  The design of the font and burner represented an advancement of technology by allowing it to burn less expensive fuel.

According to Jane Shadel Spillman in her article "American Glass in the Bohemian Style" the earliest cased glass made in the United States began about 1846 and the New England Glass Company showed case glass at the Great Exhibition of 1851 in London.  The Boston and Sandwich Glass Company also made cased glass in the 1850's and '60's and specialized in lamps and cologne bottles.  They showed "coated and colorless glass" at the Franklin Institute's annual exhibition in Philadelphia in 1846.[3]