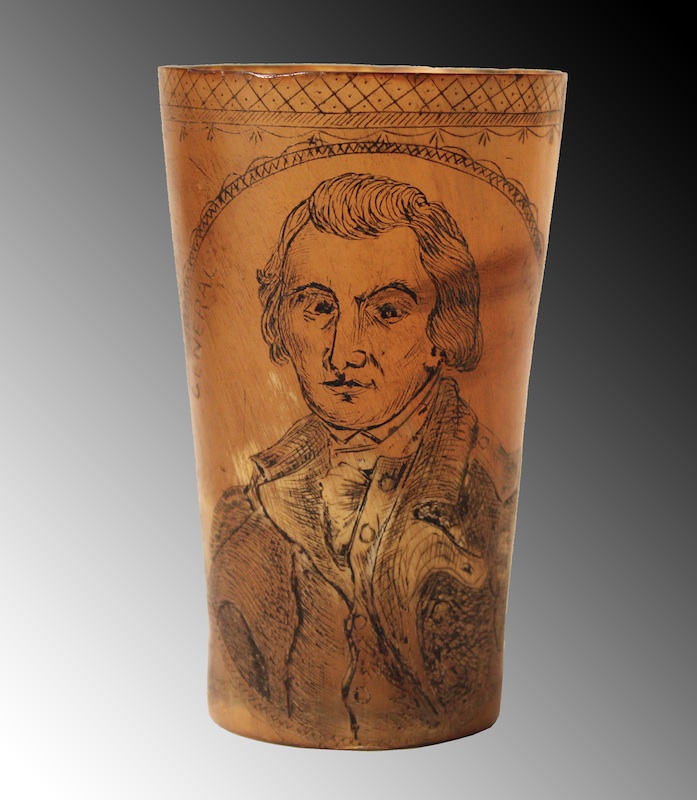 Ca. 1775-1810. Horn. Carving of General Joseph Warren, one of America's greatest heroes who was killed at the Battle of Bunker Hill on June 17, 1775. Reverse carving depicts the patriotic shield and U.S. AMERICA. Cross hatching and swags decorate the rim.....Warren, a physician, was a leader in organizing Patriots in Boston, serving as president of the revolutionary Massachusetts Provincial Congress. Dr. Warren enlisted Paul Revere and William Dawes on April 18, 1775, to spread the alarm that British troops were marching to raid Concord and to arrest rebel leaders John Hancock and Samuel Adams. Warren also participated in the Battles of Lexington and Concord. Commissioned a Major General in the colonial militia shortly before Bunker Hill, yet rather than exercising his rank, Warren served in the battle as a private soldier under Israel Putnam, and was killed when British troops stormed the redoubt atop Breed's Hill. His death was immortalized in John Trumbull's famous painting (see photo). This piece has been in private collections, the most recent public showing being at The Museum of Fine Arts, Springfield, Mass, 1976, "Bicentennial Exhibit of Furniture, Paintings and Decorative Arts 1700-1876", and is pictured in the exhibition catalogue which is included with its sale. Carved Horn cups are done in a similar technique and manner as powder horns, yet POLITICALLY INSPIRED CARVED HORN CUPS ARE EXTREMELY RARE IN COMPARISON TO EVEN THE BEST POWDER HORNS. 3 7/8 inches tall. Excellent condition.