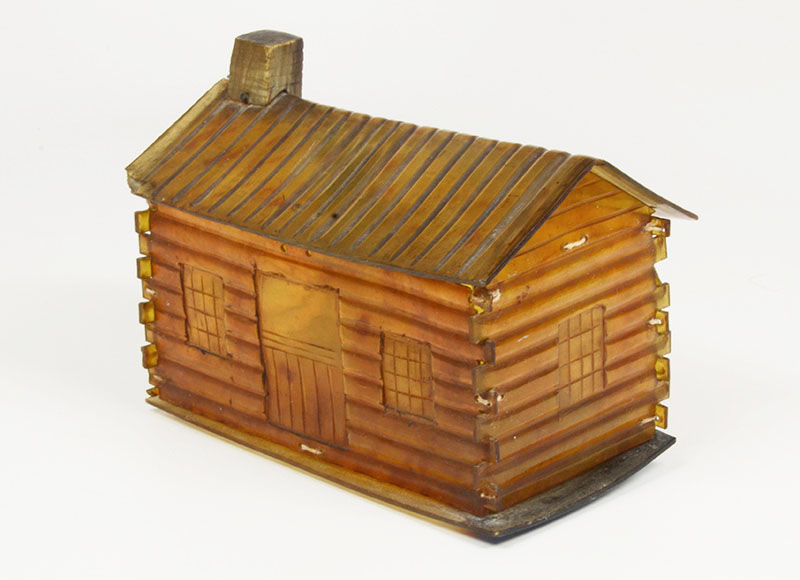 A rare American political work made entirely from sheets of translucent horn (reinforcing the feel of the untamed American West). The cabin features doors, windows, a corrugated roof and a solid horn chimney. The walls are cut with overlapping joints and bound together with twine. The roof is hinged and opens to reveal calling cards of the period. An old note reads, "Given to Miss Lydia H. Toan - The Log Cabin Campiagn 1840. William Henry Harrison elected President." Toan (1825-1904) was born in and died in Perry, Wyoming County, New York. Her father, Thomas fought in the War of 1812.

[Adapted from Wikipedia] The United States presidential election of 1840 saw President Martin Van Buren fight for re-election during a time of great economic depression against a Whig Party unified for the first time behind war hero William Henry Harrison and his "log cabin campaign". Rallying under the slogan "Tippecanoe and Tyler, too", the Whigs easily defeated Van Buren. Harrison's log cabin and hard cider campaing appealed to the common people from the rough-and-tumble West (though it was Van Buran who grew up poor and Harrison who was born into wealth).

We have dealt with a number and seen hundreds (if not thousands) of American and English horn works over the years and have never seen anything like this - it is quite fantastic.