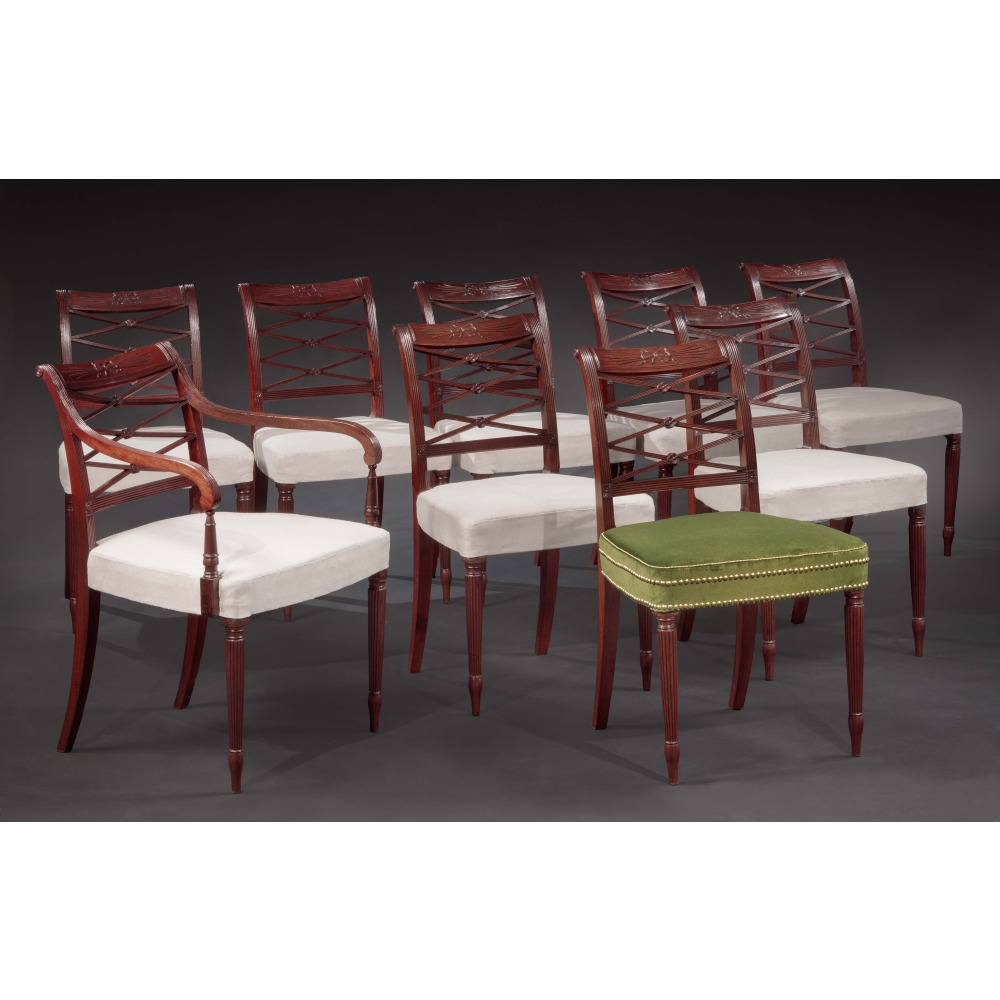 INCLUDING AN ARM CHAIR

Each with a shaped crest rail with relief carved "thunderbolts" tied with a bowknot, above three stay rails comprised of reeded, crossed banisters with carved rosettes at the intersection of the cross, held between reeded styles.  The base of the back having a reeded cross bar terminating at the styles with carved rosettes.  The over-upholstered seat with turned and reeded front legs terminating in elongated vase-form feet.  The seat frames having two front-to-back cross braces. Secondary wood: Ash.

Condition: Good: Conservators report detailing restorations to stay-rail carving upon request. One replaced front leg. Refinished with shellac in the manner of the period. Modern conservation upholstery with linen webbing and traditional horsehair stuffing. One chair with show cover has glued on tacks in the original pattern for which evidence exists on the seat rails.

Nancy McClelland, an early biographer of Duncan Phyfe, described this model of "Lattice-back" Sheraton chair as "among the rarest and most successful of Phyfe's chairs." This set is distinguished by having a very rare third crossed banister with central rosette.  All the other known models of this chair have either one or two crossed lattices.[1] Period price books and Phyfe's own invoices to William Bayard (1761-1826), one of Phyfe's most important early clients for whom related chairs were made, indicate that extra banisters and carved rosettes, and over upholstered seats meant a higher price per chair by fully twenty-five percent.  By this logic, the present set of chairs with its three crossed banisters and rosettes and the rosettes carved in the styles, would have been the most deluxe and expensive dining chairs ever made in the period.

It must be acknowledged that many New York chair and cabinetmakers made chairs in the Sheraton style, some using the motifs associated with Phyfe. The present set of chairs uses the "thunderbolt" motif used on documented chairs by Phyfe but the style of the carving is very closely related to that on an arm chair and a caned sofa made by Phyfe for Bayard, c. 1807.[2]

Evidence of the influence of Phyfe on other New York cabinetmakers can be found in a extremely closely related arm chair in the collection of the Metropolitan Museum of Art that bears the label of Charles-Honoré Lannuier, Phyfe most important competitor and recent émigré from Paris.[3]  That chair boasts the same "thunderbolt" and bowknot relief carving as the present set. (https://www.metmuseum.org/art/collection/search/233)

Phyfe particular genius was to combine attributes of French and English furniture into the same piece. In this case, it's clear that he was using Sheraton's Arm-Chair No. 2 from plate 3 in his Cabinet Dictionary (London, 1803).  Yet, Sheraton shows no related side chairs and it must be presumed that Phyfe was influenced by the lattice-back chairs of the Consulat period, as published by Pierre de la Mésangère, c. 1800.[4]  It is also likely that the introduction of a third crossed banister added to the strength and stability of the construction, an important improvement to a delicate design.

Related Sheraton chairs with lattice backs can be found in the collections of: the RISD Museum, the New York State Museum, Boscobel, Winterthur and The White House.

As a benchmark of relative quality, in Albert Sack's 1950 seminal study, Fine Points of Furniture, he classifies as "Best" a New York curule-back Sheraton side chair, which does not hold a candle to the present chairs.   A closely related Sheraton arm chair with only two cross splats or lattices and "thunderbolt" and bowknot crest-rail carving, which is similarly categorized as "Best," is described by Sack as "A superlative Phyfe arm chair.  Note the serpentine curve of the arms and the effective double cross splats..."[5]

The last time a comparable set of New York Sheraton dining chairs came to public sale was in November of 2000, almost a generation ago, when a set of nine double-lattice-back chairs, including two arm chairs, which had descended in the Livingston family of New York, sold at Northeast Auction.  This set with "thunderbolt" motif in the crest, did not have rosettes carved in the styles as does the present set.

Large sets of chairs of this quality that can be tied to Duncan Phyfe are extremely rare and highly desirable.