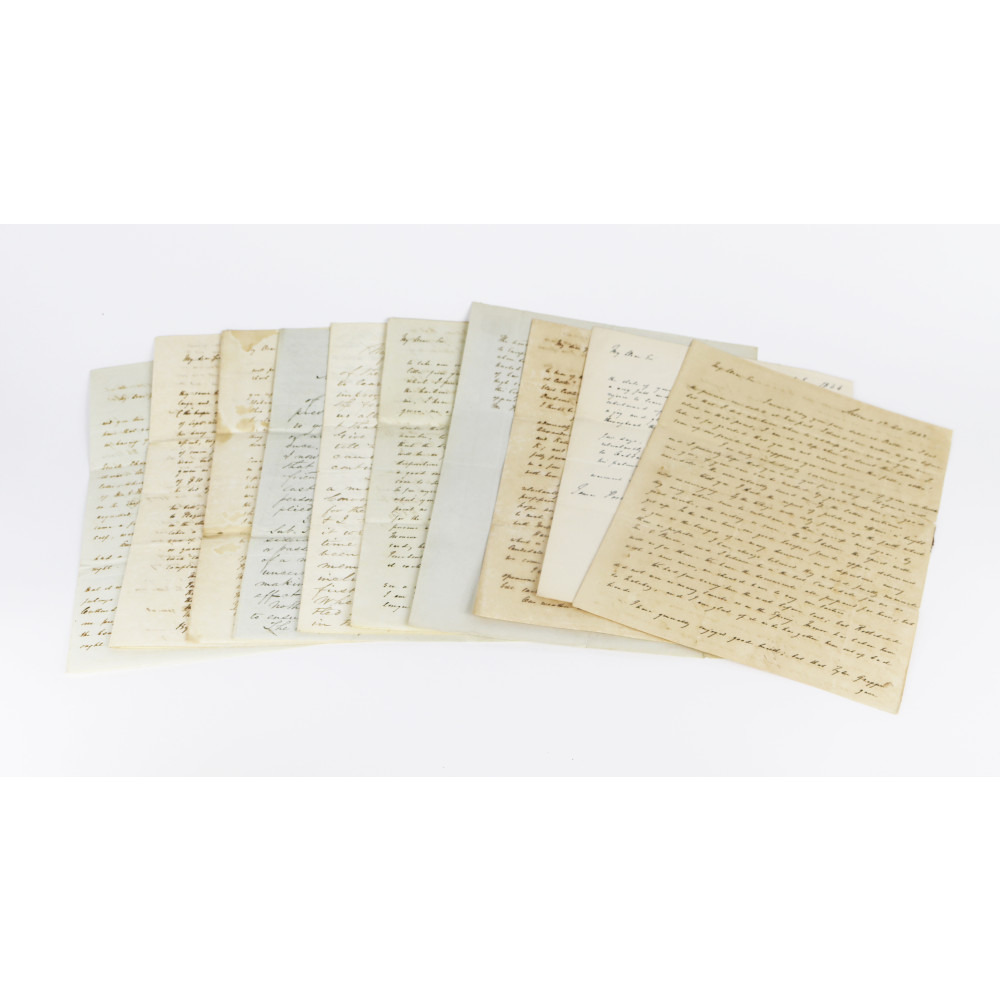 I am hesitant to use the word "important" in describing things I offer for sale, but this fits the bill.  These ten letters, written by Henry Clay to members of the Porter family of Oaklawn Manor near Franklin, Louisiana, are of importance in understanding Clay's relationship with one of his great friends of the deep south and also the life and influence of Alexander Porter.  If you would like specific scans or transcriptions I am happy to oblige, I am limited to uploading seven images here.  Information on Porter and Oaklawn can be found here, here, and here.

1)  Henry Clay, Ashland, 27 July 1835, to Alexander Porter, 2pp.  Clay discusses horse trading, an endeavor he and Porter were apparently involved in together, and lists their accounts back and forth with Porter owing $77:81.  He goes on to discuss the upcoming presidential election of 1836 in detail.  I have come to the conclusion that two candidates must be run against V. Buren to deafeat him.  One to absorb the Southern feelings and interests, and the other to embody those of the North, Middle & Western States...If Penna. as is believed shall manifest a determination not to support V.B. and will indicate clearly who she will support, on him the Tariff States should rally, whether it be Webster, Harrison, or McKean.  Each counts upon Penna., and I really should not be surprised if she goes for Harrison.  In that event, we must like him, altho' we are already, God knows, gouged with military men.

2.  Henry Clay, Ashland, 29 August 1835, to Alexander Porter, Oaklawn, 1pp+.  Clay opens by expressing regret at Porter's loss of cattle, and continues with more horse trading business including an offer of $500 for one mare and her filly.  Then he gets to the good stuff:  Harrison is making considerable progress.  If he can get Penna. which isbelieved, he will be formidable, if not the most formidable candidate.  He closes, Land, slaves, prospects of all kinds feel the ... influence of the high price of cotton & the free ... of the Banks.

3.  Henry Clay, Ashland, 2 April 1837, to Alexander Porter, 1pp+.  Clay re-iterates his invitation to Porter and his wife to visit them at Ashland and ribs him over his recent retirement from the U.S. Senate, You have, I perceive, exchanged for the councils of the Senate Chamber those of the Jockey Club - a wise and prudent exchange it was.  And I have no doubt that your election as President of the latter, which I see announced, has been far more honorable than that of Mr. V. Buren as President of the U.S.  He laments the decision in Livington's Executrix v.Story, argued before the U.S. Supreme Court, and goes on to discuss Daniel Webster, Webster is to be here in May.  He is making a Western tour.  I learn that he still cheriches hopes of future elvation.  What infatuation does not this passion of ambition excite!  That a man who only some months ago could get the vote of but one of the 26 States should flatter himself that he now sees any prospect of his election!  We shall treat him very firnedly, and, I suppose, with great distraction.

4.  Henry Clay, Ashland, 30 October 1837, to Alexander Porter, 1pp+.  Clay discusses the Panic of 1837, a financial crisis that flung the nation into a long and deep recession.  The defection of Calhoun carried nobody in the Senate, and only Pickens of his own state and Davis of Alabama in the House.  Preston and the rest of the So. Carolina delegation separated from him, and will be maintained at home...The sentiment you express that we gain by losing him is common to our friends every where.  We got rid of the odium of Nullification, and of a partner who showed for nobody in the concern but himself.  On his own account I regret it; on every other I rejoice at it.  I found it very difficult to restrain myself from falling upon him but I did.  Am I not becoming wonderfully prudent and philosophic? ... I wrote you a long letter - long for me - just before the adjournment, in respect to the Presidency &c.  I hope you received it, as there are some thing sin it which I do not wish that rascal Amos Kendall to see.

5.  Henry Clay, Washington City, 2 February 1838, to Alexander Porter, 2.5pp, in the hand of a friend but signed H. Clay.  Clay relates his incredibly busy public scheudle and fatigue, and some political news about the Sub Treasury project and the Mississippi election.  The war in Canada seems to be qulled + it is not likely to lead to any serious consequences between Great Britain + The U.S.  You wish to know something in regard to the next Presidency.  If I am to credit the information which reaches me, there is a rapid + enthusiastic concentration of public opinion in conformity with your wishes.  Clay goes on to report the states he can expect support from.  As for myself, my dear Sir, I look on with entire composure, resolved not to have my feelings unduly excited, + determined to adhere strictly to the ground of personal inactivity, which I have assumed.

6.  Henry Clay, Washington, 19 April 1838, to Alexander Porter, 3pp+.  Clay expresses his dismay that a voyage to Cuba has not improved the health of Porter's daughter, Ann.  Clay notes that Porter has been appointed a member to the proposed National Convention to nominate candidates for the Presidency & Vice-Presidency + I hope that you will be able to attend it when it meets.  Clay goes on to disclose details of the arrangements for the convention, and makes his case to his friend: If I am to judge from information poured in upon me from all quarters without exception, the public mind is rapidly concentrating upon me.  You will have seen a movement at Harrisburg indicating a purpose of separate action for Gen. Harrison.  it will do him no good, nor the cause ultimately any harm.  It is everywhere rebuked, even in Indiana _ Ohio, the states supposed to be most favorably disposed towards him, + it's formal effect will be to place him hors de combat.  The movement itself was probably prompted by the apprehension that he could not obtain the nomination.  Clay laments the apathy in Congress, and closes in noting that he has forwarded copies of several of his recent speeches.

7.  Henry Clay, Ashland, 6 November 1840, to Alexander Porter, 1.5pp, like the previous letter this one is not in Clay's hand but is signed by him.  Clay apprehends that Harrison will be elected, and relates his prospects for an appointment, I expect soon to see him, and I presume I shall then learn his views as for myself, wanting nothing from him at home or abroad, the resolution which you had heard at ? of his having adopted to appoint no one to his cabinet whose name had been under consideration for the office of President, will occasion me no regret.  I do not perceive at the same time much wisdom in the resolution.  Mr. Monroe appointed Mr. Adams Secy of State because, as he said, he never could be President; and that fact made him President.  Clay writes that he hopes to have a productive Winter session in the senate, but in any contingency it is my purpose soon to retire from public life.  Clay closes with some information on his stallion, Monarch.

8. Henry Clay, Ashland, 1 October 1843, to Alexander Porter, 1pp+.  Clay writes that he is truely and deeply concerned to hear of Porter's ill health.  He writes of the situation with their mutual party, If the Whigs will only follow up the faith which they every where seem to entertain, so their success next year, by good works, the victory is sure.  And I believe the spirit will get up.  He returns to a favorite subject, We had fine racing here the week before last; but Rothchild did not win as many courses as in the Spring.  He closes, Mrs. Clay unites with me in warm regards and ardent wishes for your health.

9.  Henry Clay, New Orleans, 8 January 1844, to James Porter, 1pp.  Clay writes to Alexander Porter's brother about the latter's ill health, I rejoice to learn that he is better and that hopes may be entertained of his recovery.  Their realization would diffuse a joy and gladden many hearts, none more than mine, throughout this entire Country.

10.  Henry Clay, New Orleans, 5 March 1847.  Clay pens a letter of introduction for the brother of his late friend Alexander Porter: The honble James Porter, the bearer herof, being about to make a voyage to Europe, I take great pleasure in recommending him to all persons with whom he may meet, as a Citizen of the State of Louisiana, one of the United States of America, as an eminen tmember of the Profession of Law, as an opulant Sugar planter, and as a Gentleman of high consideration and great respectability.  Sojourning as I am in this City, during the winter, I embrace with great satisfaction the opportunity of bearing this testimony, on behalf of my friend Mr. Porter.    H. Clay of Ashland.

Terms: My listings are priced to include the option to split the purchase price into three payments (Purchase - 30 days - 60 days) as well as professional pack-and-ship or delivery for larger items.  If you plan on paying in one installment and making pick-up or delivery arrangements yourself, please inquire for trade pricing.  If you have something in mind that isn't covered above, feel free to get in touch - creativity is encouraged.